The Olympus 9-18mm lens is a versatile way to explore ultra-wide angle shooting. It does a great job of allowing you to capture an entire scene. This lens really puts you inside the action.

Get in close to the action

For dedicated street photography in real-world situations, the Olympus 9-18mm does really well. If you’ve moved into micro four thirds from DSLRs with ultra-wide lenses then this lens is going to help you settle in and feel at home.

The real reason to add this to your kit is that you probably already have the 17mm prime that came with your PEN or the 14mm that came with your GF Panasonic. Your second cab off the rank was the excellent 20mm Lumix. But somehow all of this has left you without a wide angle as good as an LX5’s 24mm or your trusty 24mm SLR lens. The 9-18mm Olympus is your ticket out of wide angle withdrawals.

Image quality
The quality of the images is great. Good contrast and detail across the aperture ranges. It’s not as bright as your primes so you’ll occasionally need to up your ISO a little. Amin from Serious Compacts did some in depth testing of the lens. If you’re interested in the technical ins and outs of the lens then check his review out. 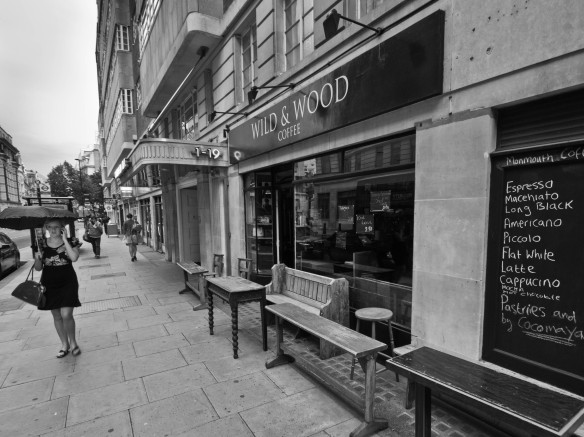 Real life shooting
It suffers a little from the “what’s the point of this image” problem that some wide angle lenses have. But it’s saved by being nice and contrasty so that you can still make out the story that’s being told. It’s variable focal length allows you to cheat on the zoom with your feet by reacting fast to a situation.

Wide angle captures the space but shrinks the subject

You’ll often find yourself on the street, maybe in a crowd, and all of a sudden you want to grab the context or the size of the crowd but can’t step back fast enough or far enough. With this lens you can drop back from a nice normal 17mm (35mm equivalent in 35mm) to the 9mm (18mm equivalent) and grab an ultra-wide shot. Powerful stuff.

Low profile on the street
Even with the hood, the small size means that your micro four thirds still looks subtle. You can snap quite good closeups without pointing the camera directly at someone. It’s a dark colour and it is seriously compact. Even the way that it extends is subtle. Class.

You can check out the Flickr album of my time with the lens on my Peter Thomson photostream.